On Saturday, March 11, I delegated to my wife for the kid’s classes and attended the Contests for Division E Toastmasters. For those of you who are new to the Toastmasters International structure, Miracle Mile Club is part of Area 55 (5 clubs) which itself is part of Division E (26 clubs). This is the first time ever I have attended a contest outside our club setting. I went there to support our beloved Miracle Mile member and club’s president Mike Molina (see more below) and to see how a district contest looked like.
As not many of us were not there, I want to share with you what I saw at the contest.
The first contest was Table Topics. The question was “If you were an animal, what would it be?” There were many different answers, like a gator, a eagle, a turtle, a bear. The winner was a contestant who wanted to be a man.  All of them had lots of vocal variety and lots of gestures and movement during their speeches.
The second part of the contest was the International Speech Contest. I was very impressed with the caliber of the speakers and the quality of their speeches.They went beyond the basics such as speech organization (opening, body, closing) and delivery mechanics (uses of words, visual aids, vocal variety, gestures): they actually tried to stir up the emotion and feeling of the audience.

Our friend Mike was the 4th contestant to speak out of 6 contestants . He delivered the speech “Extraordinarily Ordinary”, the one that helped him to win the contests at Club and Area level. However, at the District contest, he delivered it with more punch: lots more power, more movements, more gestures, and more laughs.

Mike won the 3rd place!!! Congratulations to Mike for winning the contest! And thank you for getting the Club’s name out there!

The picture above showed how happy Mike was.
The structure of the contest was similar to the one at our club. It’s clear that the organizers and functionaries were experienced running the contest. The venue was good: a square room where speakers moved around freely on the stage, saw the timer clearly, and used normal voice to reach the last row of the audience. The audience were considerate – I heard only one phone rang during the 2 hours meeting.
So please extend your congratulations to our award-winner Mike Molina, and don’t forget the takeaway in your coming speeches.

Toastmasters District 47 is getting ready to KNOCK YOUR SOCKS OFF at this year’s Spring Conference.

Join fellow members and enjoy three fun-filled and informative days guaranteed to help you increase your Leadership and Communication skills.

Keynote speaker, Ed Tate, CSP and World Champion of Public Speaking, will kick off the conference that includes presentations by talented and experienced Toastmasters and the much anticipated Table Topic and International Speech Contests.

FRIDAY -THE HAPPIEST HOUR! Wear your snazziest socks for the Friday night happy hour  at the hotel bar. 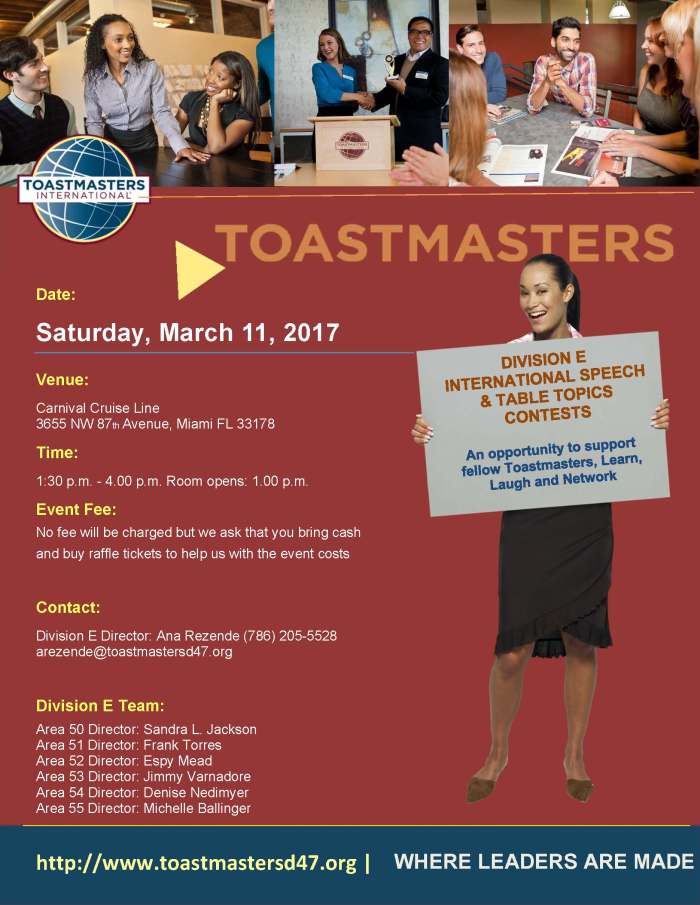 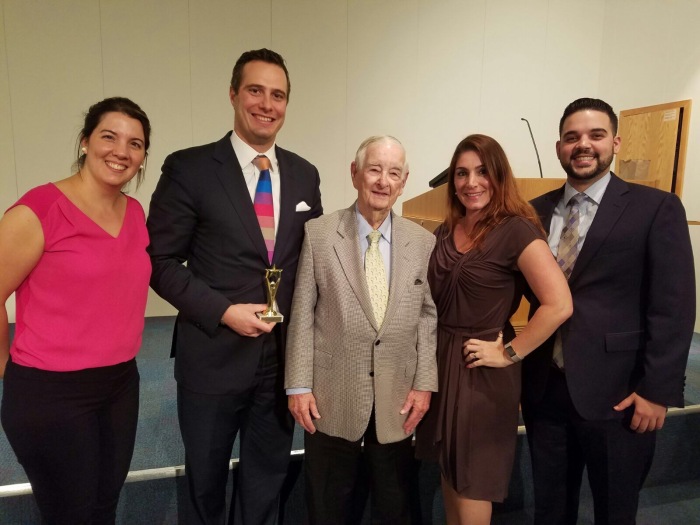 Congratulations to current president, Mike Molina, on his first place win at the Area 55 International Speech and Table Topics Contest.

His speech, Extraordinarily Ordinary, beat out contestants from 3 other area clubs.

Thanks to Club Treasurer, Christian Mesa and member, Jane Arango, for stepping up as Timers during the competition and VPPR, Elena Cobo, for acting as Ballot Counter.

Mike will go on to compete at the Division level on Saturday, March 11. See details below and make plans to come out and show your support!